Saturday afternoon at probably the busiest Wegmans around is usually a sucker’s bet, like trying to drive down Elmwood Ave. on a Saturday afternoon or going to the DMV at any time other than 5 minutes before they open.  But those groceries aren’t going to buy themselves.  The pain of negotiating around, over or through other people’s shopping carts can be eased with a soothing balm… 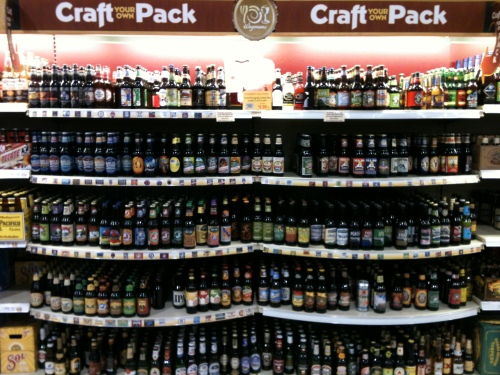 That’s right.  Beer.  And even after all the reasons why Alec Baldwin’s mom is correct, Wegmans goes and just flat outdoes every other supermarket* with a killer beer section.  Bread, milk, eggs and a six pack mixer of Lagunitas Censored, Ommegang’s Rare Vos and Three Philosophers, Southern Tier IPA, Sam Adams Cream Stout and a Harpoon Cider.

Wegman’s back wall of beer is nothing new as they’ve offered their crazy expanded selection for a couple years now, but it sure is a luxury that deserves not to be taken for granted.  And as I stood there drooling over my selections and anticipating a delicious evening (delicious by necessity to compensate for the lately woeful Sabres), I was approached by an interested gentleman looking for advice.  Setting down his twelve pack of InBev produced light American lager, he reached for an empty six pack holder and I’m happy to say he took to each of my suggestions.  Two minutes later, I saw him off with a six pack of all Western New York beers, including Flying Bison, Ellicottville Brewing, Southern Tier and Ommegang selections.

“All these beers are from here?”

So, tonight while I’m watching the Sabres game, listening to the bubbling airlocks of fermenting Vargas Blonde Ale and enjoying Wegmans crazy-ass selection, I’ll be happy knowing there’s someone new out there knocking back some great local beer for the first time…

* I’m not forgetting Consumer’s or the awesome Village Beer Merchant and you shouldn’t either.

One response to “Craft A Pack”